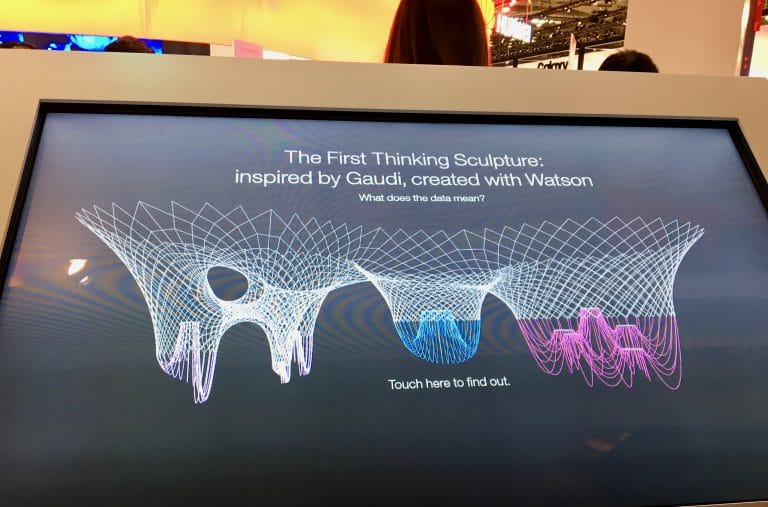 “Creativity is always wanting to do discover new”, says Gaudí expert Daniel Giralt Miracle in an IBM produced video for the Mobile World Congress in Barcelona.

The video explains how IBM’s Artificial Intelligence system Watson has designed an inverted dome inspired by Gaudi’s style. IBM engineers fed Watson photos and drawings of buildings by Gaudí, books on the works of the architect and all relevant information about his work until he learned how Gaudí worked.

Watson designed then an organic shaped roof based on geometric shapes that reflect light, vaguely reminiscent of an inverted Gaudi roof with holes similar to the courtyards in La Pedrera. From these holes cables emerged that mimic the strings that Gaudí used to make the resistance calculations for the arches in his buildings.

In the MWC installation cables moved up and down as color and light changed and intensity according to the topics of the tweets related to artificial intelligence and the world of Gaudí, physically changing the shape of the roof. Artificial Intelligence made the big data visible in the physical space.

Now, as in Gaudi’s time, the city, modernity and new lifestyles demand a different architecture. In the words of Daniel Giralt Miracle: “Watson is the natural extension of Gaudi’s thought.”