Nature made into architecture

“When I went to take the measurements of the site, it was totally covered with some yellow flowers, which I used as an ornamental theme for the ceramic. I also found an exuberant palmetto palm, whose leaves fill the grid of the gate of the house.» With these words, Joan Bergós, a disciple and great friend of Antoni Gaudí, recalled the architect’s explanation of how he became inspired to come up with one of the most characteristic motifs of Casa Vicens: the glazed ceramic with carnations and the cast iron fence with the fan palm.

Nature is present in all the ornamentation of Casa Vicens, heralding one of the main characteristics of the architectural language that would be recurrent through all of Gaudí’s work: architectural naturalism. This nature is seen both outside the house, in the decoration of its façades, and inside, in every room.

On the lower level of the house, in the dining room, we find ivy leaves represented in the sgraffito. The dining room ceiling is full of olive leaves made with papier-mâché from the factory of Hermenegildo Miralles. On the covered porch we find sgraffito representing pomegranates and hydrangeas and a tempera painting showing palm leaves. Now that the original polychrome painting has been restored in the smoking room, we can see dates and palm leaves in plaster honeycomb work. Moreover, vegetal motifs and ears of wheat are visible in the famous papier-mâché floor tiles, also produced by the Miralles factory.

On the first floor, where the family bedrooms are located, we find more sgraffito decorating the walls and representing bramble, fern leaves, reeds and passionflower. The decoration of these rooms is complemented by the ceramic coffers of the beam fillings, where ivy, grape and blackberry leaves are represented. On the terrace of the principal bedroom we find two flower boxes decorated with ceramic pieces representing the sunflower. This same piece was used by Gaudí for the exterior decoration of the house that he built in Comillas (Cantabria) for Máximo Díaz de Quijano, popularly known as El Capricho. Finally, in the small lounge on this floor, a trompe-l’oeil reproduces a low-angle view of the dome-covered tower-minaret located right above the space, creating a feeling of continuity between the interior and the exterior. There, in addition to representing the architecture itself, we see a set of doves and ivy leaves that seem to climb up to the top part of the house. 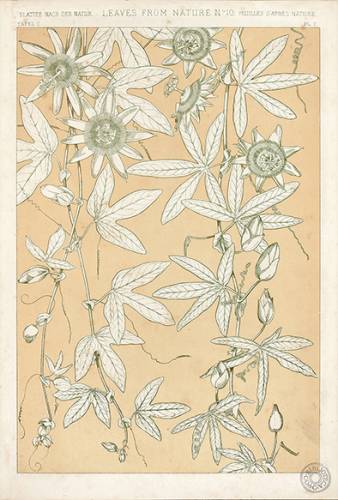 We could perform an iconographic reading of all this ornamentation linked to the cycle of the passion of Christ, since all the elements depicted have inter-related religious symbolic significance. Thus, the olive trees on the decoration of the dining room ceiling and the palm leaves on the balcony allude to the olive and palm branches with which Jesus was received by his devotees in Jerusalem; the bramble, blackberry and reeds are an allusion to what the Roman soldiers mockingly placed on Jesus when presenting him before Pontius Pilate: the crown of thorns and the reed, in the form of a sceptre. The passionflower or passiflora symbolises the passion of Christ, as different parts of the flower are associated with some of the elements of the passion and the crucifixion: the filaments with the crown of thorns; the five stamens with the five wounds of Jesus; the three stigmas with the three nails used to crucify him and the 10 petals with the apostles who remained loyal. The grape leaves present in the ornamentation of the coffers represent the wine at the last supper and the blood of Christ.

Beyond this possible iconographic interpretation, the use of all these natural elements as architecture at Casa Vicens is attested by the documentary sources that the architect reviewed, specifically a treatise on ornamentation entitled The grammar of ornament by British architect Owen Jones, which showed a series of prints with the same ornamental motifs that we find at Casa Vicens in one of its chapters.