3 key elements of your visit to Casa Vicens

We all enjoy interesting facts, and although much has been said and written about the great genius of Catalan architecture, Antoni Gaudí, today we enter the first house he created, with three key ideas to look out for during your visit to Gaudí’s first great work: Casa Vicens.

Casa Vicens will make you feel like you are in a botanical garden, in both a real and figurative sense; nature is, without doubt, a constant throughout the tour of this house. The garden penetrates the interior of the house through the decorative elements of sgraffito, tiles, card… all the artistic techniques centre around the most important decorative theme: nature.

There are two obvious examples of this transition from nature to architecture. The first of them can be seen in the carnation, a flower that Gaudí discovered in the grounds of the house and then transformed into a decorative motif for the tiles on the facade of Casa Vicens.

“When I went to take the measurements of the site, it was totally covered with some yellow flowers, which I used as an ornamental theme for the ceramic. I also found an exuberant palmetto palm, whose leaves fill the grid of the gate of the house”.

With these words, Joan Bergós recalled the architect’s explanation of how he became inspired to come up with one of the most characteristic motifs of Casa Vicens: the glazed ceramic with carnations and the cast iron fence with the fan palm. 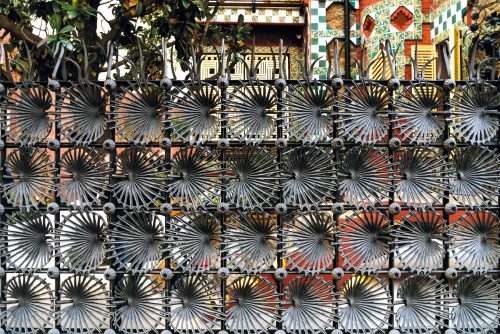 Besides this, we can see the palmetto leaf used as the main element of the cast iron grille of this first house, where the carnation reappears in its crisscross design.

Essentially, we are in the presence of a Gaudí who portrays nature in a clear and direct way; it is not a symbolic or abstract allusion to nature.

The search for maximum luminosity is a recurring challenge in Gaudí’s architecture. At Casa Vicens this was not a minor issue, however, as he also considered that since it was a summer house, it was essential to create a cool environment. Thus, his work with light and water can already be observed here, in the young Gaudí’s first house. In the covered porch, located on the main facade of Casa Vicens, the architect used different inscriptions depending on the position of the sun, on the south side the phrase, “Sol, solet, vinam a veurer” (Sun, little sun, come and see me) and “Oh, l’ombra d’istiu” (Oh, the shade of summer) can be seen.

As well as this, Gaudí managed to give this World Heritage Site a sense of freshness, through the addition of three water points, one located in the covered porch that we can see today; a second, which was an octagonal fountain located at the entrance, on the land that today forms part of Carrer Carolines street; and a third, which was a large waterfall that was demolished in 1946. With these three features, and the abundance of vegetation in the garden, Gaudí succeeded in creating a true oasis for the summers of the late nineteenth century.

It is incredible how, at the age of just 30, Gaudí was able to create such a rich ornamental landscape at Casa Vicens. Apart from the decorative motifs, it is worth highlighting the technique used to make them, from the tiles to the ironwork, the roof, the woodwork, the ceilings, the walls… Instead of observing a mere ceiling, we are confronted by a sky of trompe-l’oeil; the décor will not fail to move you.

“So for instance, let’s think of a house, neither large nor small, what one might call normal; by enriching it and enlarging it, it becomes a palace.” Antoni Gaudí.

So far, we have revealed three of the most important characteristics of this first house designed by Gaudí. If you would like to continue to discover more about Casa Vicens, you are welcome to join us in our virtual guided tour, given by Rubén Momblant.