The mysteries of water in Gaudí’s work (I) 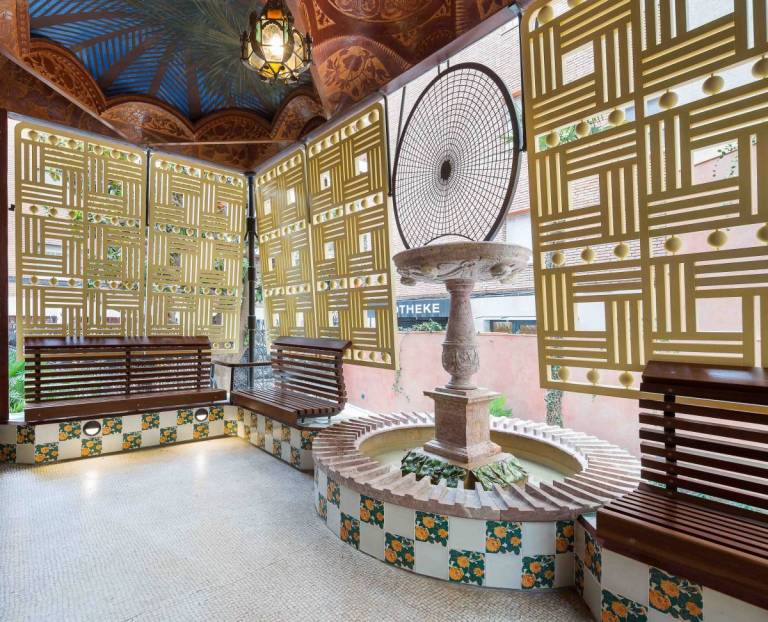 In addition to the well-known inspiration and influence of plants[1] in Gaudí’s work, another element that we find at Casa Vicens and in some of his other projects is water. Without going into any further detail, the channeling and reuse of water that we find at Park Güell is a very good example of this. There, under the columns of the hypostyle hall, we find a cistern that catches the water filtering through them and serves as the main source of irrigation for the park.

However, if we go back to the beginning of Gaudí’s career, we see that when he was a student at the Provincial School of Architecture of Barcelona, he worked on the Water Tower project (1875) and the fountain for Plaça de Catalunya (1877), in addition to working with Fontserè on the waterfall and reservoir at La Ciutadella Park (1875). There are also several spaces at Casa Vicens where water plays a leading role. One of the most remarkable of these is the fountain that presided over the covered porch of the building and brought a feeling of coolness, movement and pleasant sounds.

The fountain originally consisted of a jet of water that fell into a marble basin after first passing through an elliptical iron mesh and weave that recalled a spiderweb, allowing sheets of water to form that broke down sunlight shining from the west into the seven colours of the rainbow and gave a feeling of coolness to the space.

Next to the fountain, there were tilting blinds with latticework composed of Oriental-inspired geometric shapes that initially helped to regulate both the entry of light and the circulation of air. In fact, this covered porch was designed to connect the garden to the dining room, serving as a transitional space between the indoors and outdoors that visually brought the nature of the garden inside the house.

It is important to note that the covered porch was completely transformed when the house was expanded in 1925[2], as it was closed, divesting it of its original function and most representative elements. This was when the fountain was dismantled and relocated to the garden. Years later, when part of the garden was sold, a member of the Herrero Jover family kept it.

We have recently recovered the original thanks to the donation made by Ignacio Herrero Jover and the renovation and restoration work that returned the covered porch to how Gaudí designed it. By referring to photographs from the period, the restoration team has reconstructed the parts that were missing from the whole to once again display the fountain as it originally looked.

Oddly enough, whilst restoring the fountain we discovered that the column is not perforated. It therefore could never have served as a spring, as people had always imagined.

So then how did the fountain work? Our working hypothesis is that it functioned by catching rainwater, draining it from the terrace located directly above. If so, the effect of the water falling through the metal spiderweb may only have happened on days when it rained.