The mysteries of water in Gaudí’s work (II)

Apart from the fountain, another element directly related to the water is the exposed brick waterfall, formed by a catenary arch that was located in the garden. Above the arch, there were two rows of thin brick pillars crowned by a capital with two water tanks at the ends that enabled the water to fall continuously like a fine rain into a broad basin in the archway. The spandrels of the arch were adorned with a series of terracotta bas-reliefs by the sculptor Antoni Riba, who also made two terracotta sculptures that crown both doors of the dining room of the house.

At first, the waterfall was part of the garden fence. In addition to bringing a cool environment, it helped to protect the neighbouring building, thereby providing more privacy. 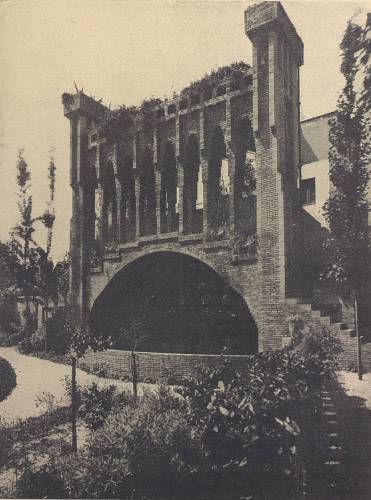 The project to build the waterfall was submitted to Vila de Gràcia Town Council to obtain the building permit on 1 September 1883, when work on Casa Vicens had already begun. During the expansion of Casa Vicens and the garden in 1925, the waterfall was transformed into a free-standing structure, like a triumphal arch, until it was demolished in 1946, when part of the property was sold. It was partially reconstructed in Reus in 1976 to commemorate the 50th anniversary of Antoni Gaudí’s birth. The project was directed by Joan Bassegoda, director at that time of the Cátedra Gaudí, commissioned by the City Council of Reus.

Finally, there was also a natural spring of bicarbonated mineral water, said to have curative properties since the 18th century. The chapel of Santa Rita, attributed to Joan Baptista Sierra de Martínez in 1927, was built on the very spot. We will speak about the chapel shortly, but to return to the spring, its, waters had been declared state-approved since 1895 and were marketed commercially. The chapel was separated from the rest of the house in 1946 when the surface of the property was divided and it was finally demolished in 1963, when the land was sold.