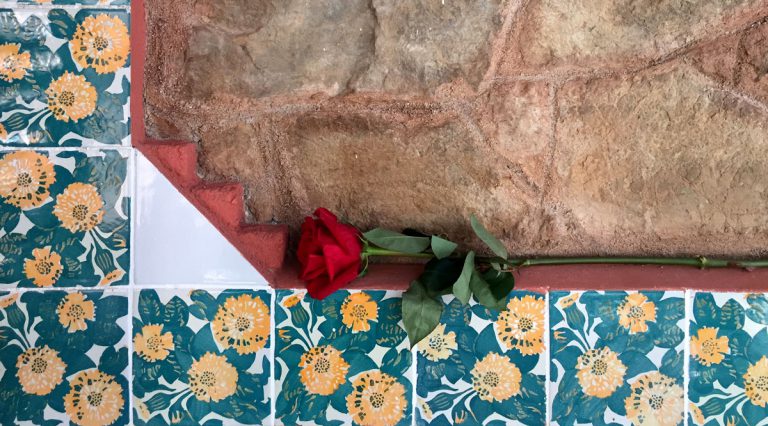 Gaudí incorporated images of Saint George, the mythical dragon he slew, and roses into the buildings he designed long before these motifs became associated with Barcelona’s festive annual book day, which was celebrated for the very first time in 1926. His fascination with the myth of the dragon was so intense that he even conceived the Casa Batlló as an architectural retelling of the saint’s encounter with the fearful beast. How does one go about conveying a story through architecture? It certainly must be a daunting task.
I would have loved to have seen the look on Josep Battlo’s face when Gaudí told him, “This, Mr. Batlló, will be an allegory of the legend of Saint George replete with brightly colored scales that glitter in the sunlight, the curved back of the legendary dragon crowning the roof, and an enormous lance in the shape of a cross jutting out of the façade. It is the knight’s lance, Mr. Batlló, the lance of our Saint George.”
Saint George’s Day book fairs have become a tradition in Barcelona and other cities throughout Catalonia and Spain, and a number of authors have made Gaudí the subject of works of fiction and non-fiction just as Gaudí once made the Saint George the subject of a major work of world architectural heritage. Gaudí’s numerous appearances in biographical, historical, mystery, and science fiction novels and novels of manners have made him the most literarily celebrated architect in history.
The following is a short summary.

Penned by the great-great granddaughter of Eusebi Güell, Gaudí y el Conde Güell. El artista y el mecenas is the only book on Gaudí written to date by a member of the family that supported the architect at key moments of his career.  Drawing upon the oral and written family remembrances, Carmen Güell provides an intimate account of one of the cultural high points in early twentieth-century Catalan history.

According to the plot of this novel set in Barcelona, which weaves its way from the early twentieth century to the present, Maria, the relative of a member of a Christian fraternity, and her mathematician boyfriend have until December 2007 to find a powerful relic that can save humanity from imminent disaster.

A top executive of La Caixa bank is burned alive and hung from the balcony of a famous building designed by Gaudí and a former minister of culture is dying of thirst and starvation after surviving five days of torture. The villain behind these heinous acts is an sadistic assassin obsessed by Gaudí. Police detective Milo Manart is determined to prevent him from striking again.

G by Daniel Sánchez Pardos, Published by Planeta in 2015

G is a thriller that constructs a hypothetical portrait of a youthful Gaudí on the basis of the little that is known of that period of the architect’s life. The story, which takes place in Barcelona in 1874 (a moment at which Gaudí was studying his craft at the “Llotja”), is set against the vivid backdrop of the Bourbon restoration in Spain.

Gaudí’s life story is an enigma. At what point did a young, fiercely anti-clerical and bohemian Gaudí become a visionary mystic with a mission to construct a “cathedral of the poor” in Barcelona? This novel sets out to explain the radical evolution of the architect’s beliefs and aspirations.