From November 5 to December 12, 2021. Temporary exhibition included in the price of tickets to Casa Vicens.
Buy Tickets

The title of this exhibition was an expression frequently used by Ernesto Ventós. The perfumier and collector, creator of the colección olorVISUAL from the Fundación Ernesto Ventós, used this phrase when, through his olfactive memory, he connected with a video artwork.

In using images and sounds in the creation of video art, the perfumier adds one further element, smell.

Thus, on this tour through Casa Vicens, while interacting with the uniqueness of Gaudí, the essences that accompany the video creations connect us more intensely with the colours and shapes of the house.

Fragrances of liqueur, tobacco, florals and ozone… These aromas will show us how the works by video art creators converse with the deliciously concentrated spaces of Gaudí’s first house.

Yesterday, today and the future, united by scents.

Location of the works in the Noble Floor: 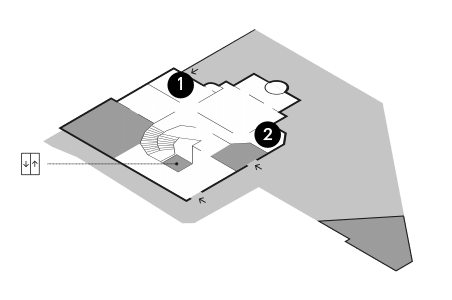 A walk through the architectonic spaces of a place in which the olfactory qualities of the stone and its walls are evoked through the appearance of decontextualized objects, hidden presences and a whole series of unusual elements.

Two figures seek each other through the halls and grounds in a static chase, in the course of which the space is stripped bare to expose its wounds and absences in an unfolding that transcends the gaze and embraces the other senses.

Smoke is an aerial, atmospheric fiction, an incitement to wander. The rhythm is hypnotic, accompanied by a piece of electronic music.

The protagonist is a cloud of smoke that lets itself be carried along by the flow of events. The story is fixed by the treatment, precise, floating on the white background.

The drawings of J. H. Fragonard* inspired the first few seconds of the animation, the scene with the smoke merging into the foliage of the tree.

Smoke is also the smell of camping in the forest, of sausages grilled over a wood fire, of snow-covered mountains, of polluting factories, of roasting metal, of a cigarette burning down.

It’s when I reflect on the sources of inspiration that the precise memory of two olfactory emotions come back to me.

The smell of a cigarette in summer when the weather is hot.

The day I met a cloud during a walk in the Alps. Curiously, the cloud had a perfume.

Location of the works in the 1st Floor: 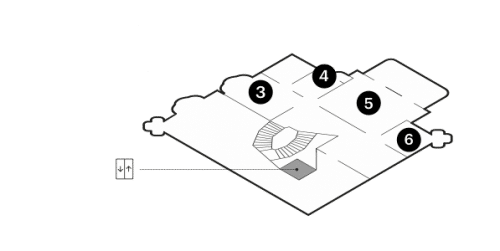 Life cycle in which things are born clean, bright and mobile. From extreme beauty to absolute degradation, everything in the end pressures and destroys.

An almost absurd act, tied to the phenomena of the universe, where everything is broken down and begins again, where the smell changes from the freshness of dawn to the morbidity of the cemetery.

“My experience of smell during the making of Birthday flowers was strong, going from the sweet scent of fresh Spring blooms to a wafting of decay and stagnant water.  My experience of watching the flowers over seven days translated into changes I would make in the room, as though the room were responding to the flowers’ provocation. They communicate with one another through me. It was not my intent to convey specifically a sense of smell, but one of empathy between things, between the vase of flowers and the room.   Naturally, smell was integral to the flowers and so integral to how I responded through the room. How much this is understood by the viewer is unclear to me.”

‘… Its waters have shaped the city with a to-ing and fro-ing that determines his life, and with their smell, which impregnates everything …’ (from Protocolli Veneziani I)

Colours, surfaces, and various forms invoke feelings, thoughts and memories, reinforced by movement and their associated flow of aromas, reflected in the flowing fields of colour. This wide range of aromas is expressed through different colours, ranging from black to white. The flow of colours is the aromas’ horizon of memories as they slide through the pores of the skin. The microcosm dreamed of perfume fragrances.