Casa Vicens is the first important commission Antoni Gaudí received and sowed the seeds of all his architectural work.

In 1883, Manel Vicens i Montaner, a stock and currency broker, entrusted the young architect with designing his summer garden home in the former village of Gràcia. It is his first masterpiece and one of the first buildings to kick off the Modernisme movement in Catalonia and Europe.

The current configuration of Casa Vicens and its land is the result of many changes and transformations, with three clearly differentiated spaces: the original construction from 1883-1885 designed by Antoni Gaudí; the expansion from 1925 designed by Joan Baptista Serra de Martínez; and the garden surrounding the building.

With its new purpose as a museum and cultural space, the renovation project has adapted the spaces in the building from the 1925 extension in order to house the various services needed for the new cultural spaces and the general public. So, it hasn’t been necessary to modify any of the spaces designed by Gaudí.

In order to make the building accessible and give it the necessary flow for visitors to get around inside, a modern staircase work of Elías Torres, José Antonio Martínez Lapeña and David Garcia has been installed in place of the original one connecting the two spaces and a lift has been added, stopping at all floors and the rooftop.

On the ground floor, there is an area to welcome visitors and the first and second floors feature spaces displaying the permanent collection focusing on the building and the temporary exhibits and activities that make up the museum project.

The La Capell Store / Bookshop is located in the basement.

At the end of the garden is a Café.

Accessibility programme. The building and routes have been adapted with different resources to facilitate and improve visitors’ experience at Casa Vicens. Accessible tour for people with people with reduced mobility.

The garden as it is today is fruit of a detailed study and reflection on the original surroundings of Casa Vicens, as Gaudí conceived of it, and the gardens of the time. In his first work, the architect took inspiration from Mediterranean flora and fauna, reflected in his resources and decorations inside.

This allowed us to recreate and plant a garden with Phoenix and Trachycarpus palms, climbing plants, magnolias and roses, among other plant species of the time in this space that has been subject to successive reductions in size over the years.

This space that originally housed the coal cellar, under Catalan vaults, is now home to the La Capell speciality store/bookshop, where visitors can find items to complement their visit, ask questions and continue to enjoy their tour of Gaudí’s first house.

Above the entrance, the ground floor housed the spaces for day-time use: a central dining room surrounded by an enclosed porch, a smoking room and a foyer.
On this floor, the smoking room is a place to relax and have fun, a true oriental oasis: its multi-coloured plaster mocarabes on the ceiling replicate palm trees with clusters of dates and the walls have papier-mâché tiles with their original polychrome finish in greens, blues and golds. Under the papier-mâché tiles, the wainscoting in this room alternates ochre and sky blue tiles, with red and yellow roses painted in oil above.

The dining is also in this floor. It’s a room in which architecture and decoration, the original wooden furniture designed by Gaudí himself, a collection of 32 paintings by Francesc Torrescassana, plant motifs on the walls, ceiling and fireplace, covered with ceramic tiles, form a true work of art. From the dining room, visitors move into the covered porch, with a marble fountain to cool off this space.

The Vicens family’s more private, intimate rooms are on the first floor: two bedrooms, a bath and a sitting room. The sgraffito with plant motifs, full of symbolism, inundate and penetrate all the rooms: a sign of what would later be seen throughout Gaudí’s work.

On the terrace, located on top of the covered porch, there is a wooden bench with a metal structure to calmly contemplate the surrounding garden. This outdoor space is off the main bedroom, ensuring loads of light and proper ventilation.

In the bedroom, the space between the beams is decorated with ceramic ceiling tiles made in pressed papier-mâché and green polychrome with vine motifs. The walls are covered with a layer of stucco symbolising reeds and rushes, on one side, and ferns on the other. Gaudí based all the stucco plants in the home on those he found in the Cassoles torrent behind Casa Vicens.

Above the smoking room on the main floor there is a small sitting room with a false dome, in gold, with its spectacular trompe-l’oeil depicting flying birds and climbing plants, as if the room was connected to the outdoors. On the walls, there is wainscoting with ceramic tiles in white, sky blue and ochre.

The second floor is home to the Casa Vicens permanent collection, which gives visitors a global view of everything they have or will see during their visit, depending on whether they choose to start from the bottom or the top.

This top floor of the original construction was profoundly changed in the various renovations of the building, even coming to house two completely independent flats. To return this space to its original structure, all of the inner walls, flooring and drop ceilings have been removed. The result is an open space with exposed wood beams supporting the various sections of the pitched roof and windows on three sides, creating a Moorish calligraphy of protruding and withdrawing elements that bring an interesting play of light and shadow.

At Casa Vicens, Gaudí created his first accessible rooftop, a true vantage point and place to get away from it all and contemplate life. It features a walkway around all four sides of the pitched roof, with curved terracotta roof tiles to collect the water.

On this rooftop, a small cupola crowns the tower on the western corner of the façade and three identical brick structures act as caps to the home’s chimneys. These structures, like the façade, are clad in green and white ceramic tiles and show how Gaudí was influenced by Islamic and Asian architecture.

The rooftop area is part of the extension to the building and has been adapted and made accessible to the public. 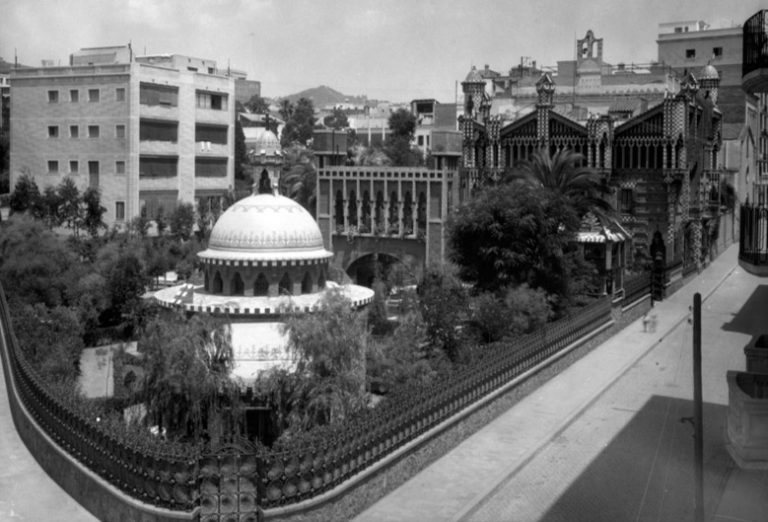