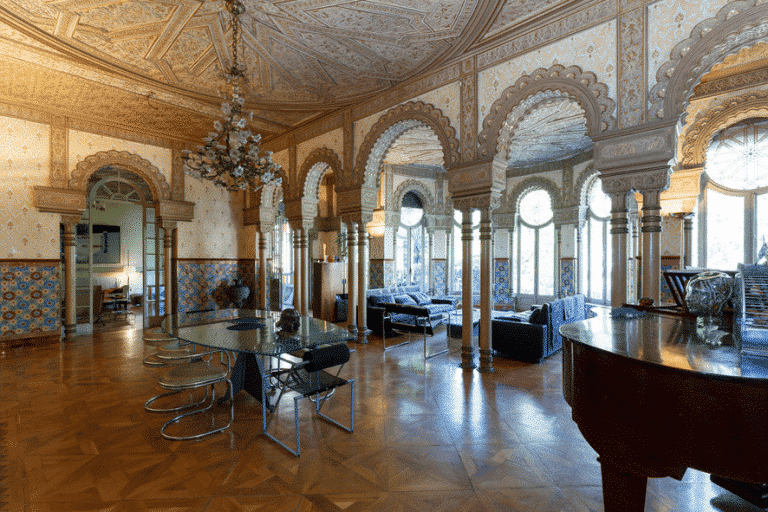 In the mid-19th century, the city of Barcelona was deeply interested in Middle Eastern culture. This taste for the Middle East coincided with a moment when the city was expanding and its new bourgeois class was gaining strength. This was reflected in the construction of new buildings with an eclectic style where the Arabic architecture from the south of Spain and north of Africa became a model of inspiration.

Passeig de Gràcia was the central axis featuring the largest concentration of buildings with a neo-Arabic style. Although many have disappeared, Casa Pere Llibre (Passeig de Gràcia 24), by the architect Domènec Ballet (1872), is a clear example of this style.

In Gràcia, Casa Vicens is the culmination of the interest in Middle Eastern culture. Antoni Gaudí designed a building which, apart from being inspired by references to Islamic and Mudejar culture, created a work with a completely innovative language.

Very close to Casa Vicens, in Plaça Lesseps, 31, in 1906 the architect Jaume Torres planned a residential building for the Ramos family, which is where the name “Cases Ramos” comes from. The first floor, intended for the entrepreneur and politician Ricardo Ramos, preserves a lounge decorated according to the preference for neo-Arabic tastes of the time.

In the area of Vallcarca, on Passeig de la Mare de Déu del Coll, 41-51, we can find another example of Middle Eastern-style architecture. This is known as the “Casa Marsans”, a summer home for the family which founded Banca Marsans and the first travel agency in Spain. The project was carried out by Juli Marial i Tey in 1906. Its interior, with its Islamic-themed arches and decoration, takes us to faraway places.