Returning the house, as much as possible, to its original state, as designed by Gaudí in 1883, was the fundamental goal of the restoration project.

The restoration work on Casa Vicens that began in March 2017 uncovered original polychrome elements hidden under various layers added over the years. The guidelines for the restoration have been to return the building to its original state with the utmost respect for the home. A multidisciplinary team, made up of architects, artisans, historians, experts on the works of Gaudí, chemists and photographers, among others, helped ratify the preliminary hypotheses.

On this floor, the restoration focused on the foyer, dining room, gazebo and smoking room.

The foyer leading into the house was modified and now has a side entrance. The decorative surfaces were covered with cream paint that was removed to uncover a combination of red and copper tones on the various decorative elements in this space. The beams and coffered ceilings showed damage from use, water leaks from the bathroom above and two missing units.

In the dining room, the polychrome layer had become darker and work had been done to repair water leaks. For example, the sgraffito with plant motifs, in pure oriental style, on one of the walls was repainted in green tones with glitter. Cleaning this wall with gel solvents revealed new details on the inner ribs of the leaves, as well as the shades of green.

The roof of the gazebo showed a build-up of salt due to poor weatherproofing of the terrace and had been repainted in brown. After removing the layer of paint and repairing the damaged sgraffito, it was put back together and returned to its place.

The main façade features a fountain, an important core element with a circular base to collect the water, a main body and metal structure. As a result of various works over the years, the whole piece had disappeared, so the reconstruction is based on photographs.

The colours revealed in the smoking room after removing the cream paint were Mozarabic in style, with a blue background and shades of green on the leafs and gold details on the relief. The pieces that cover the walls are made of papier-mâché and Casa Vicens is one of the few buildings that preserves these pieces that use a technique so unique to Modernisme.

The restoration project aimed to return the foyer to its original state, so plaster pieces from when the space was expanded have been removed and reproductions have been fashioned to fill in the empty spaces.

On the first-floor landing, polychrome stucco walls were found under a layer of white paint that was removed to reveal the original colours. They were part of the stairway that is no longer in use.

On this same level, several test slits were made to determine the polychrome on the decorative elements covering the walls and ceiling. This revealed the original colour palette, which differs from those visible today. Gaudí gave each room continuity internally and with the rest of the rooms, both in terms of colours and symbols. This has become even clearer as the original polychrome work is revealed, darker and more intense.

Gaudí designed the interior of the house like the outdoors, and vice versa, because we find Mediterranean flora and fauna throughout the decorations inside. 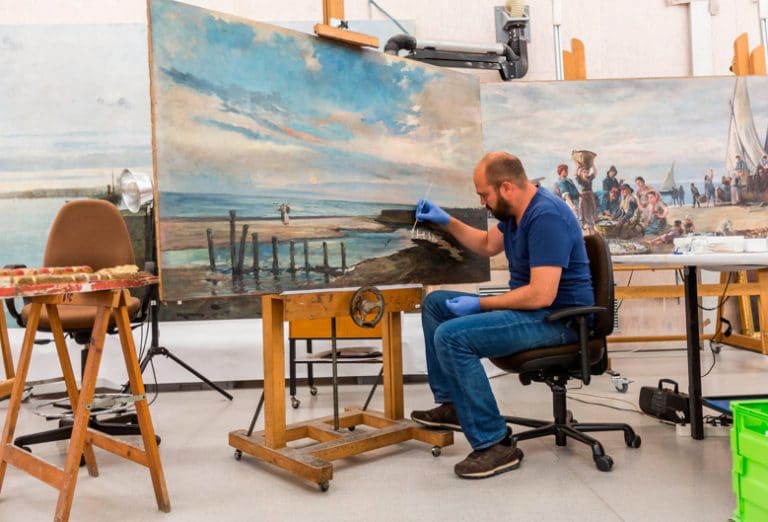