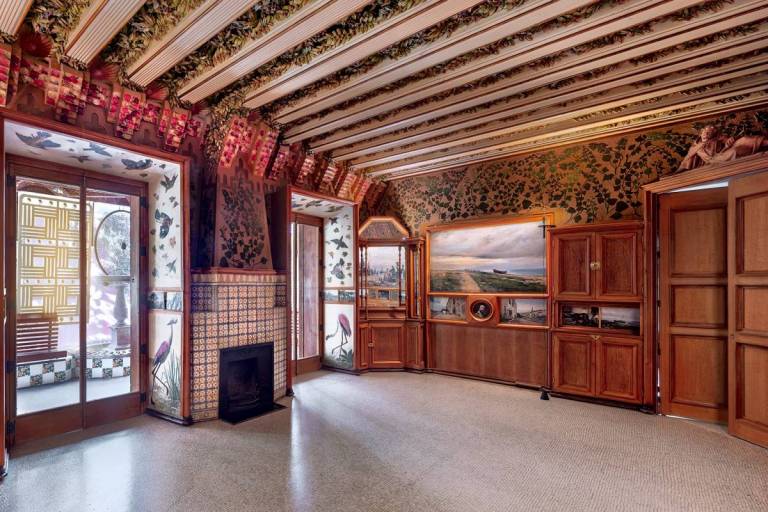 Five years after opening to the public, Casa Vicens is carrying out preventive conservation work in its dining room, from January 9 to 18, 2023.

Gaudí’s first house has started the year carrying out cleaning, maintenance and restoration tasks. The house will be closed for ten days in order to spruce up the garden, perform a deep clean of all the facilities and, above all, carry out preventive conservation work in the first dining room designed by Gaudí. This room is home to a collection of 32 paintings by the artist Francesc Torrescassana i Sellarés (1845-1918), which were owned by the property’s developer, Mr. Manel Vicens i Montaner. The works of art will be disassembled in order to carry out the conservation work.

The oil paintings belong to the furniture of the dining room that can be visited at Casa Vicens, and are therefore exposed to possible damage. For this reason, within the preventive conservation plan of the house-museum, intervention on this pictorial collection has been prioritised to avoid its deterioration. Among the tasks being done to reduce the vulnerability of the artwork, is the protection of all the backs of the canvases. Alveolar and translucent polycarbonate plates to reinforce the back of the canvases will be used to reduce possible accidental damage. Visual inspections will be able to be done during the scheduled periodic controls. 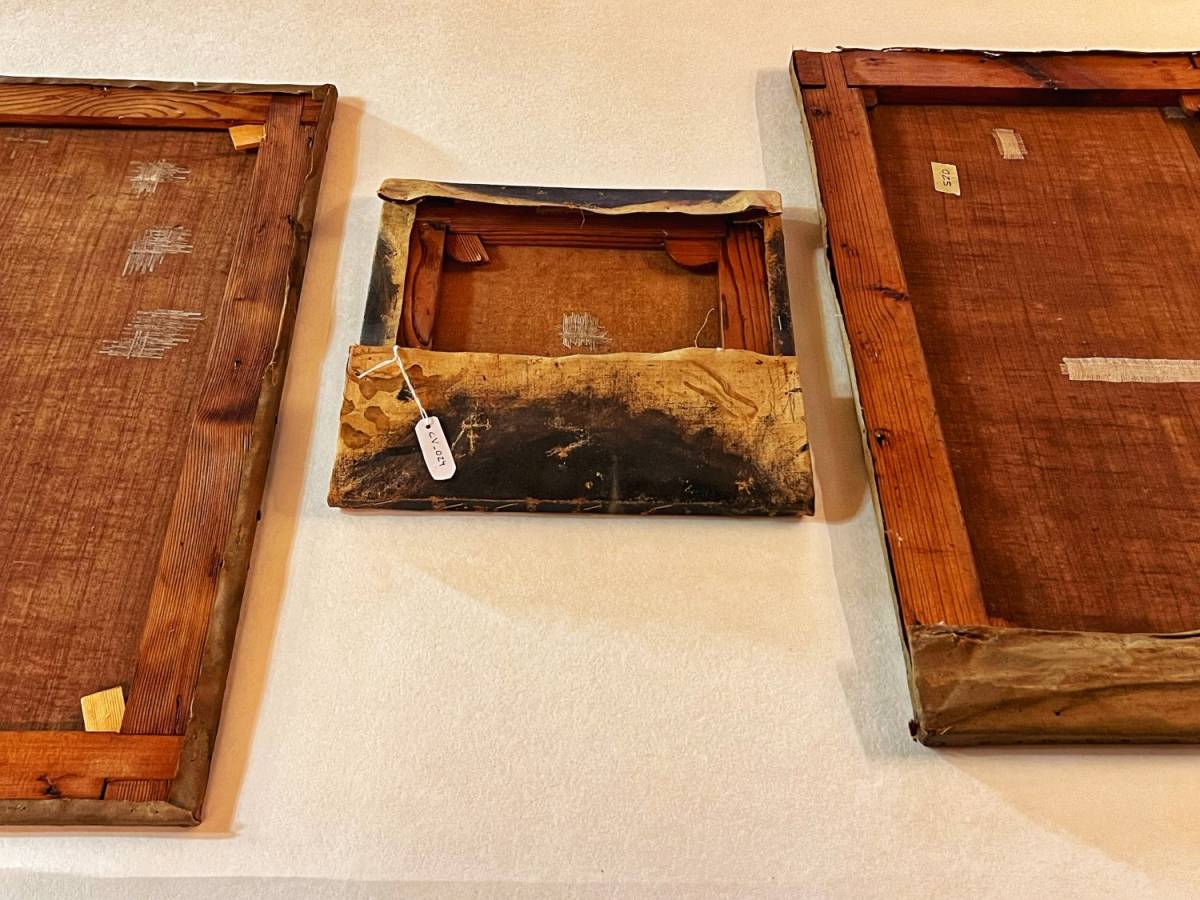 To carry out this work, the paintings were taken down and removed from their frames. The backs of the canvases and frames were then cleaned, and a preventive insecticide product was applied to the wood. Successive stages will involve placing the protection plates using a reversible system, fastening the wedges to the frame to prevent them being lost, mounting the paintings in their frames once again, and then hanging them on the walls of the dining room.

In addition to these actions, the larger painting that presides over the dining room, showing a fishing scene, will require a special intervention, since the canvas needs to be stretched. This will involve the removal of the canvas from the frame, taking care to protect the pictorial layer, then flattening the canvas and placing perimeter bands for stretching. It will then be nailed back on its frame, which will have been previously cleaned and disinfected. 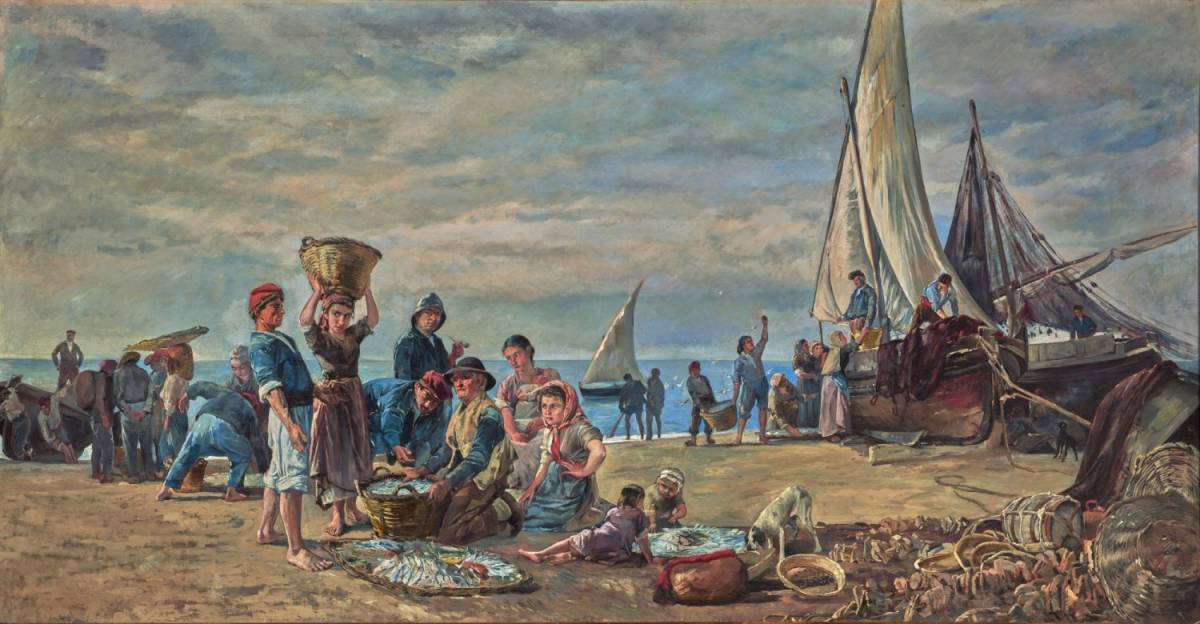 In the words of Emili Masferrer, director of Casa Vicens, “every year we close for a few days in January to fully restore some of the rooms in the house. On this occasion our highest priority has been the preventive conservation of the collection of works by Torrescassana, with the aim of bequeathing this UNESCO World Heritage to future generations in the best possible condition”.

The dining room of Casa Vicens

The Casa Vicens dining room, designed by Gaudí as the epicentre of the house, presents an exquisite decorative programme that combines different materials and craft techniques. Its original furniture, made of lemon wood, consisting of a cabinet bookcase in the central part and several cabinets and mirrors, is striking. The furniture was designed by Gaudí to frame a collection of landscape-themed paintings, the work of the Barcelona painter Francesc Torrescassana i Sellarés. He was a protégé of Ramon Martí Alsina, considered to be the great driving force behind the Catalan school of landscape painting in the second half of the 19th century. Within the collection of paintings owned by Manel Vicens, one of the largest surviving pictorial collections of the artist, the work “The arrival of the fish” is noteworthy, where Torrescassana shows a traditional scene set on the Catalan coast. There are also two circular portraits of two unknown men, portrayed in nobleman’s clothing. When Casa Vicens was built at the end of the 19th century, the paintings requested by the bourgeoisie were those of landscapes, traditional scenes and portraits. The paintings in the Casa Vicens dining room are a faithful representation of the artistic taste of the time. Within the framework of the Casa Vicens’ restoration and rehabilitation project carried out between 2015 and 2017, this pictorial ensemble was involved in a thorough restoration process that consisted of cleaning, strengthening the supports, fixing the polychrome and retouching the pictorial layer.

The decoration of the dining room is completed with different plant motifs, among which are the dark green climbing ivy sgraffito on the upper part of the walls, and the olive trees with foliage represented as papier-mâché tiles on ceramic coffers in the ceiling beam. It illustrates an insistent use of plant motifs by Gaudí that is repeated throughout all the rooms of Casa Vicens, as a leitmotif, integrating the outdoor garden inside the house.

He was a Catalan painter. He studied at the Llotja art school, where he received lessons from Ramon Martí i Alsina, whose studio he was to later work in. Alsina painted a portrait of him in 1858, titled El pintor Francesc Torrescassana (The Painter Francesc Torrescassana).
In 1864 he exhibited work at the Exposición de Madrid, which earned him an honourable mention and a grant to go to Rome. He also visited Paris, where he came into contact with the art movements of the day.

Back in Barcelona, his painting included local folk scenes, Oriental scenes and historical scenes. In 1869 he went to Suez to practice this style, where he painted several works on the opening of the canal, some of which received several awards. His work can be seen in several Catalan museums, such as the MNAC, the Montserrat Museum, the Víctor Balaguer Museum Library in Vilanova i la Geltrú, the Galeria de Catalans Il·lustres, as well as the Madrid Museum of Modern Art and in the Louvre.

In his early work, within the framework of realism, it is possible to see the clear influence of his master Alsina. Over time his palette became softer and his manner of painting was more textured and influenced by Impressionism. In this later period he also produced portraits, the most famous being Miquel Vilaregut, painted in 1911.