The annual event returns, marking the beginning of the gallery season in the Catalonian capital. From today until Sunday, the Barcelona Gallery Weekend takes place, with the participation of galleries, public spaces and a complementary programme of activities and guided tours.

For the second year running, Casa Vicens Gaudí participates in the festival’s complementary programme, this year with the “Scales” exhibition. Gaudí’s first house opens its doors to a dialogue with contemporary creation through the exhibition, whose name refers to the protective function of scales, drawing a comparison to the idea of Casa Vicens as a refuge, a summer oasis where one can rest.  Each one of the six works featured, invoke this role in their own way, creating a dialogue of materials with those on display in Gaudí’s house: iron, wood, ceramic, paper, stone and wool make up the raw materials of the exhibition.

The collective exhibition features six pieces from different national and international artists, created in the last five years. The curator of the show, Susanna Corchia, director of Barcelona Gallery Weekend, explains that, “the works create a game of temporary, functional, formal and poetic connections with Casa Vicens, encouraging a reinterpretation of every corner, from the perspective of contemporary artists”.

Until 10th November people coming to Casa Vicens will be able to enjoy this World Heritage site with the works of Jean Denant, Marria Pratts, Francesco Arena, Jordi Mitjà, Vanesa Muñoz and Marc Larré. They will be situated in the garden, at the entrance gate and in different rooms of the house.

Access to the exhibit is included in the price of entry to Casa Vicens. 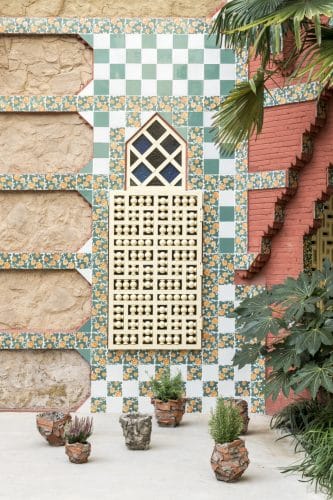