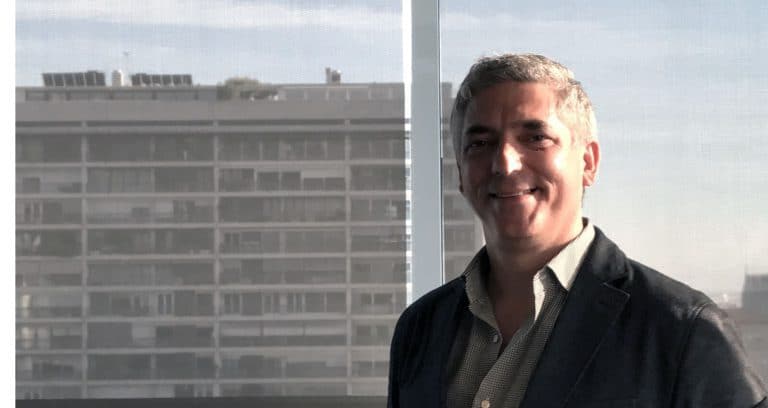 Last week El Periódico d’Andorra published a very interesting interview with Joan Abellà, Casa Vicens’ manager who explains how the experience of visiting our house will be.

Joan Abellà Barril (Pont d’Armentera, 1971), who served as general manager of the MACBA 2008–2016, has taken on the directorship of the very first house designed by Gaudí, Casa Vicens, which will open its doors to the public this fall as a house-museum. Abellà will handle marketing and public relations for the new institution, which is owned by MoraBanc.

Casa Vicens, which was until quite recently a private residence, will now be open to the general public for the very first time.

Up until 2014, it served as the home of several generations of a family that had owned it for almost 130 years. The house was commissioned by Manuel Vicens i Montaner, who lived there for only a few years before his death in 1877. It was subsequently purchased in 1899 by the Jover family, which sold the property in 2014. We are trying to ensure that the first private home designed by Gaudi meets the highest accessibility standards by the time it opens its doors to the general public while respecting as closely as possible the original design executed in 1883. This is by no means a simple task.

We need to accomplish two highly important things. One is taking a building that has the curious distinction of being the very first private residence Gaudí designed but the last to enter the constellation of Gaudi sites open to the public in Barcelona and making it a mecca for people interested in his work. This entails communicating the message that Casa Vicens is the prelude to everything else that Gaudí went on to create. We are also working with a building that started out as a three-sided structure but underwent a major transformation with the addition of a fourth façade in 1925, when what had up to that point in time been a private residence with a stairway leading to bedrooms on an upper floor was divided into three separate apartments. On the other hand, we want to make the building as accessible as possible. While we had the opportunity to reconstruct the missing staircase, which will allow visitors to experience the house as originally conceived by Gaudí, we also had to deal with the problems involved in fitting an elevator to improve accessibility.

However, there isn’t any visual record of how Casa Vicens originally looked.

We have very few photographs and a few basic sketches, but many of Gaudí’s papers and drawings were burned during the Civil War. This has meant that we have had to rely more on primary sources, and the house itself has proved to be an unexpectedly rich source of information. It’s been a matter of peeling back layers until we reached the original surfaces and structures.

I understand that you’ve found surprises, for example in the smoking salon that had been repainted.

As the earliest photographs we have are are black and white, it is impossible to determine the shades of the original colors. Period photographs suggest the room was decorated in tones of ochre. However, during the restoration work we discovered touches of blue, green, gold and other polychrome tones. We have had other surprises as well, particularly in the gallery, which we discovered had previously been fitted out with revolving blinds rather than glass windows. We are restoring the fountain, which features a rainbow motif . . . one of a thousand details Gaudí left us that we are trying to recover.

The large waterfall and garden have unfortunately been lost forever.

This is really a shame. The waterfall could be reproduced, but not where it was originally constructed given that the size of the property has shrunk over time. As the house was originally intended as a summer retreat, Vicens acquired surrounding plots of land to enlarge the estate, which was later divided into parcels after it became a year-round residence. Open spaces disappeared as the city expanded.

What did the present owners find the first time they entered the house?

Well, MoraBanc carried out research before purchasing the house: a team of architects was hired to determine what needed to be done to convert the building into a museum and how the traffic it will generate would affect the neighborhood. Numerous studies were conducted. Although Barcelona was very open to the idea, given the house’s status as a UNESCO World Heritage site, the process was naturally rigorous.

What condition was the house in at the time?

The second issue was how much the project would cost in terms of time and money. Walking into the building one could see how marvelous it was, but although some parts were incredibly well conserved, key elements such as the original staircase had been removed. A study was conducted to determine what it would cost to transform a private house into a cultural centre. MoraBanc considered the investment required to be reasonable and decided to go ahead with the project. The next step was to secure the necessary permits and work out the details with the city heritage authorities.

Yes, but on two conditions: that Casa Vicens would serve as a cultural amenity for city residents as well as a tourism asset.

What impact will it have on the neighborhood? What can be done to manage the traffic it will generate?

We’re working on an operations plan in consultation with the District of Gracia. Barcelona has a number of unique characteristics and Gracia even more in that it has its own special personality. Therefore, we are talking with city authorities about what can be done to prevent a constant avalanche of visitors. The plan? Convince people that Casa Vicens is not a place to rush in and out of and that we offer a unique atmosphere that sets us apart from other Gaudí sites. We’ll use a ticket purchasing system that requires people to book visits at specific hours on specific dates. That will allow us to control visitor flow during activities we’re thinking of organizing such Sunday cocktail hours. We also believe that the best way to enjoy this house is to spend the time it takes to discover the thousands of marvelous details that are here to discover.

What is the public looking for?

We are aware that our target audience will not be first-time tourists in Barcelona but rather repeat visitors looking for a deeper cultural experience.

Isn’t there a combo ticket for all the Gaudí sites in Barcelona?

Not yet, but it’s under discussion. The idea is to create a Gaudí Pass.

The best itinerary would be to start with Casa Vicens and see Gaudí’s first work before moving on to the rest.

(laughter) Yes, of course. But not everyone follows the same cultural instincts. People aren’t always interested in the chronological order of things. Our intention is to make Casa Vicens as appealing as possible. In any case, tourism in Barcelona is very well organized.

The house can accommodate 50 visitors per hour.

Isn’t that a lot?

No, not really. We’re talking about groups of approximately 17 people every 20 minutes. In a four-story house with ten interpretation points, a video, the smoking room, an outdoor gallery, a terrace and a library, I’m not worried.

And the bar and the garden!

That too, not to mention the rooftop terrace! We are working on all these details, but what interests me most is the quality of the visitor experience, not the number of people entering the door. Quality begets quality.

Casa Vicens has unfortunately been engulfed by decades of disastrous urban development.

That is what we have done as a society. This house survived by grace of the fact that people continued to live in it. Progress during the postwar period and the dictatorship was building tall buildings and demolishing the rest. Casa Vicens has had UNESCO World Heritage status since 2007 and been under the protection of the Generalitat as a cultural heritage site since the 1980s.