Casa Vicens Gaudí is continuing the restoration of its most iconic room: the smoking room 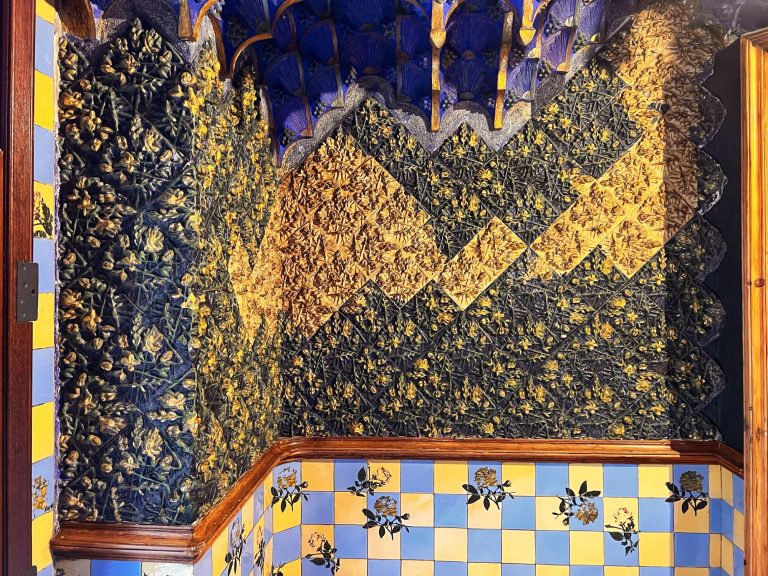 At Gaudí’s first house the year has started on the tip of a scalpel. After a halt in 2020, this UNESCO World Heritage Site has resumed its commitment to the maximum possible recovery of the house’s rooms designed by Gaudí, just as the architect conceived them in 1885.

During the tremendous restoration and rehabilitation work that was carried out in Casa Vicens between 2015 and 2017 with the aim of converting this private home into a house museum, and just a few months before its doors were opened to the public, it was discovered that in the smoking room the dominant cream colour with golden accents was not the original decor. Thanks to a system of test cuts, it was revealed that both the upper part of the walls, decorated with papier maché tiles, and the stunning ceiling of plaster muqarnas, had a rich blue polychrome background, different shades of green for the palm leaves and gold for relief details.

The removal of all the post-Gaudí polychromy has to be carried out as if undertaking a surgical operation: very slowly, with a scalpel. It was therefore a titanic task in 2017, where several teams worked continuously to recover the original colour on much of the surface. However, there was not enough time to remove all the cream colour, so since then restoration work has been carried out little by little in this room, with the most intensive being that done in January 2019. That work made it possible to recover the original colours of the ceiling in its entirety. On this occasion, Casa Vicens will remain closed to visitors from the 10th to the 18th January, 2022, and the wall located on the east side of the smoking room will be the focus of the restoration and conservation work. The cream paint layer there will be removed and there will be an intervention to secure the original blue colours.

In the words of its director, Emili Masferrer, “recovering the essence of the smoking room has been an objective since we opened in 2017; the intervention in this room is very complex, not only because of the dimensions, but also because of the delicacy of the material, which is why it is done mainly on days when we are closed to the public so as not to interfere with the visits.”

It should be noted that the smoking room is the most iconic room of Casa Vicens. In just 10 square metres of surface area it concentrates the romantic vision of the “oriental” world held at the end of the 19th century, and is also a space where Gaudí invites us to awaken the senses of sight, touch and even smell, through the suggestive polychromy of decorative elements, the textures of the materials and the intoxicating effects of tobacco aromas. 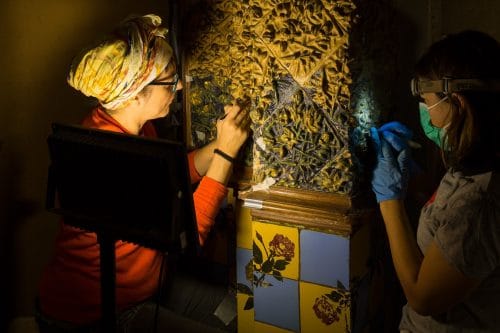 Period context of the smoking room

To talk about the smoking room in the Casa Vicens is to talk about the taste for all things Oriental and exotic that was fashionable throughout Europe in the 19th Century, and which was felt in all manifestations of art, from painting to literature, music, furniture and architecture. The fascination westerners had for the Oriental was strongly allied to the Romantic Movement and had its roots in colonial expansion by European powers. In Spain, this expansion was directed towards Africa, and information about the habits customs and attire of its people were circulated via the media, leading to countless engravings and prints of Oriental scenes which helped capture the public’s imagination. Numerous publications and studies also were published connected with this still unknown part of the world.

In this context, a specialised room associated with tobacco consumption appeared in western domestic architecture, complete with decoration demonstrating the nineteenth-century interest and fascination for exoticism and far-away countries. These rooms were usually decorated with Eastern elements, in order to create an atmosphere referring to a romantic idealisation of the East that was based on imagination and fantasy.

The smoking room was incorporated into domestic environments and known in France as a fumoir and here as a fumador, as well as an Arab room, a Turkish room or an Oriental saloon, and became fashionable throughout nineteenth-century Europe in the houses of the wealthy and was closely linked to the habit of smoking.

Although tobacco arrived in Europe soon after the discovery of the American continent, it was not until the nineteenth century that its consumption became more widespread. By this time it was imported from the East, which explains the Oriental connotations. It was during the Industrial Revolution when the product became highly popular, giving rise to its mass production and marketing.

Cigar smoking was an activity associated with exclusivity, luxury and elitism, although the nuisance caused by the smell was a constant concern during the nineteenth century, leading to great attention being paid to the planning of the ventilation of homes. For this reason, a special room was added to the list of domestic spaces, which developed into something more than simply being a place to retire to smoke.

In the context of nineteenth-century domestic architecture it represented an example of the clear division between masculine and feminine spaces, given that it was a space predominantly used by men. The smoking room was configured as a private place for men, where they could amuse themselves, talk about business, read, relax and enjoy tobacco in an atmosphere of comfort and decoration designed for male users, usually inspired by the Eastern world. In Spain, heavily influenced by its Muslim heritage, these rooms were decorated in a style associated with the Arab world.