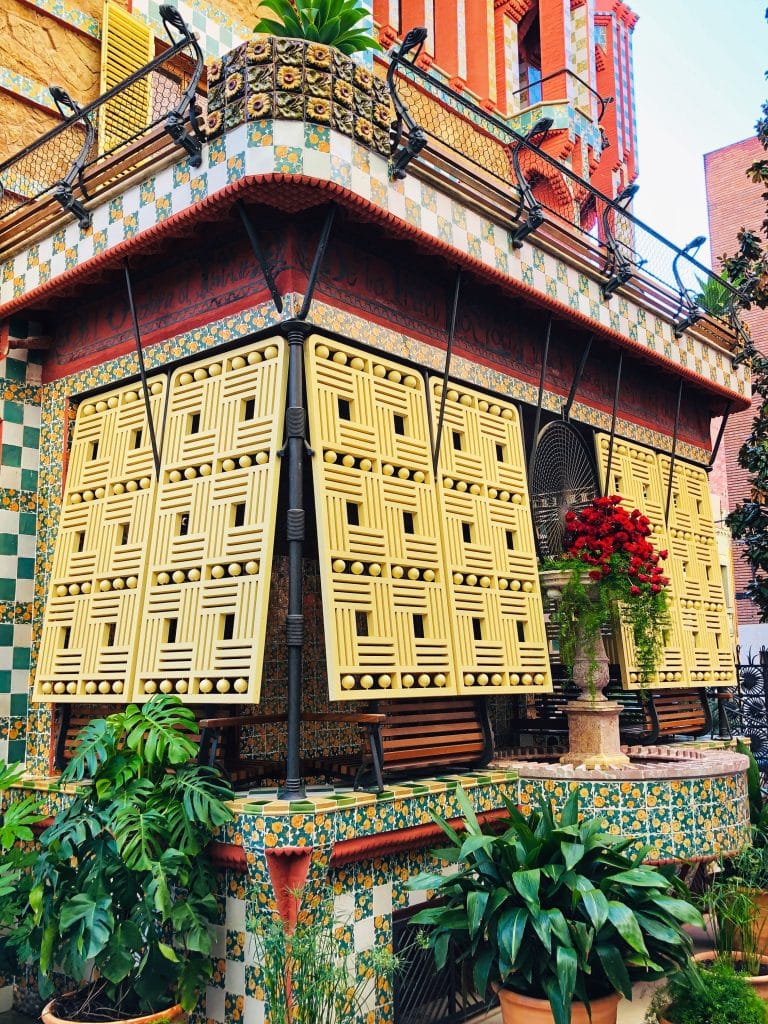 The site of Gaudí’s first house has been closely linked to the celebration of Santa Rita’s feast day since the 18th century. There was a spring on the land of the estate, and its carbonated waters were marketed and became quite famous at the end of the 19th century. In the 20th century a chapel was built to house the spring, but it was torn down in 1963 to build a large block of buildings.

Despite the chapel’s disappearance, tradition was kept alive thanks to the former owners, the Herrero-Jover family, who opened the garden gates every May 22 to celebrate this day, welcoming the people of the neighbourhood in to drink water from the spring. In 2017, with the opening of Casa Vicens as a house-museum, the new owners made a commitment to the Vila de Gràcia neighbourhood to continue the tradition of Santa Rita.

Therefore, although this year for COVID-19 we cannot host the usual rose blessing in the garden, we have prepared a double floral decoration, which can be enjoyed at the fountain in the covered porch and in Casa Vicens’ original bathroom, from Saturday, May 22 to Monday, May 24.

In addition, from the 20th to the 24th you will be able to visit Casa Vicens at half price by entering the code “SANTARITA” when purchasing “Casa Vicens visit” and “Spring Vicens” tickets. This World Heritage Site has extended its usual opening hours for this weekend and will also open on Monday 24th, the second day of Easter and a public holiday in the city of Barcelona.

The link between Gaudí’s first house and the celebration of Santa Rita dates back to the second half of the 18th century when, on the land where Casa Vicens is located, there was a convalescent home run by the Discalced Carmelite Fathers of the “Josepets” at what is today Plaça Lesseps. These Carmelites, surprised by the rapid recovery of the people suffering from different ailments who drank water from the spring that ran there, decided to dedicate the site to Santa Rita, patroness of impossible causes. In 1886, just one year after Casa Vicens construction was completed, these carbonated waters were declared to be of public utility and their commercialization began. But it was not until 1927, with the extension of Casa Vicens, that it was decided to build a chapel that would house the natural spring. The chapel was included in the Casa Vicens estate until 1946, when some plots of the garden between the chapel and the house were sold, which meant that the chapel was separated from Gaudí’s construction. Finally, the plot was sold in 1963 and the chapel was demolished to build a large block of buildings on the corner of Carrer Carolines and Avinguda de la Riera de les Cassoles.

The Herrero-Jover family, which lived in Casa Vicens from 1899 to 2014, began opening the garden gates every May 22 to continue the tradition and people from the neighbourhood came to celebrate the day and drink water from the natural mineral-medicinal spring. In spite of the chapel’s disappearance, the tradition of Santa Rita remains very much alive today in the neighbourhood’s collective memory. Therefore, after Casa Vicens’ renovation, its conversion into a museum and its opening to the public in 2017, the commitment to give continuity to tradition and to pay tribute to the saint every May 22 has been maintained.