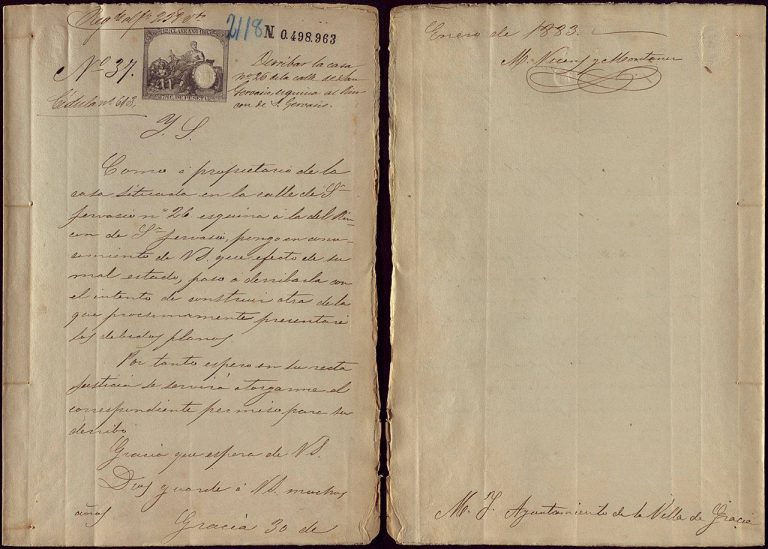 One hundred and thirty-five years ago, on 30 January 1883, Manuel Vicens i Montaner applied for a permit from Vila de Gràcia Town Council to demolish the house inherited from his mother, which was in poor condition, and to construct in its place the building that would end up becoming Casa Vicens.

A few days after receiving approval from the Town Council, on 20 February 1883, Mr Vicens filed a new application. As expected, he requested a permit to build a new house according to the project signed by the young architect Antoni Gaudí.

The set of plans attached to the application sent to the Town Council were found by Joan Bassegoda Nonell (1) in the Municipal Archive of the District of Gràcia in 1969. This interesting discovery made it possible to accurately document the year when the house was built, pushing it back to 1883. Until then, it had been thought that Casa Vicens had begun in 1878-1879 (2), coinciding with the time when Antoni Gaudí finished his architectural studies.

These dates had first been proposed by Ràfols, Gaudí’s biographer, but as we see in the documents submitted to the Town Council, the project not start until 1883. It is therefore possible that several years passed after Mr Vicens commissioned the work from Gaudí before the procedures to carry it out began.

(2) In his biography about Antoni Gaudí, published in 1929, Joan Francesc Ràfols dates the construction of Casa Vicens to 1878, at the same time as the project to build the Mataró Workers Cooperative building.