From January 20 to June 26, 2022.
Temporary exhibition included in the price of tickets to Casa Vicens.
Buy Tickets

The show ‘Guerra’ is an exhibition created exclusively for Casa Vicens by Nikki Luna. Luna is a Filipina artist living in Balearic Islands. She has been immersed in the stories of marginalized and vulnerable women for over a decade. Her current exhibition ‘Guerra’ continues to be grounded in community, weaving their narratives into art and re-contextualizing their experiences from a place of oppression into a position of power. Luna is known for her body of work which primarily tackles social/political violence with a feminist lens. It covers—and is not limited to—misogyny, women used as weapons in war, and women’s human rights. Luna is a woman living and connected to a nation recovering from colonialism and struggling under imperialism beset by issues such as poverty, corruption, and landlessness. 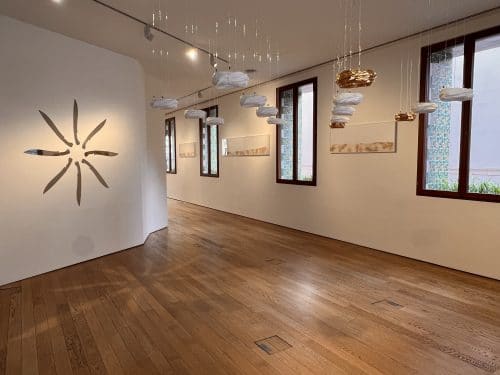 On the occasion of this exhibition, guided tours in English have been scheduled, carried out by the artist herself, which will have simultaneous translation into Catalan and Spanish. After the guided tour you can visit the Casa Vicens with an audio guide.

In the 18th century Philippines, a settlement relocated from the Kansahayan River bank to flee pirate raids. They settled beside Tubig ng Bayan (Town Water) river bank where they built a stone church for the Lady of the Most Holy Rosary. The town became known as Santo Rosario. Nikki Luna traces her roots to this small interior town in the northeastern part of the Philippines. In Guerra, she presents her evocations of Rosario. As in the act of praying, Luna grips on the beads, each telling the story of an ordinary woman whom she calls family.

Nanay Mili (Mother Mili), Nikki’s mother’s great grandmother, sold cacao harvested from their backyard, fermented bagoong (shrimp paste) and cooked tulingan (mackerel tuna) cooked in her kitchen. Everyday, she put her wares in a tall metal container that she secured on her head with a gikin, or a wound cloth. She then walked to the town market, balancing her ware on her head. Along the market roadside pavement, she squatted down and sold her goods. Whenever she could, she took the BLTBCo Bus to Manila where she sold in a bigger market. Lola Conching, Nanay Mili’s grandchild, was a homemaker. She was married to Lolo Jo, who was a public servant in Rosario for 29 years. He was able to buy a small land beside his house. He lived in a home made of concrete and drove an owner jeep and a motor bike. Lolo Jo was left paralyzed after a motor accident. Lola Conching and Lolo Jo had 12 children, 8 of whom were women.

Five of the women chose to find work outside of the country to support the family. As how Nanay Mili secured the burden on her head with a wound cloth, these five balanced precarity and steely resolute to toil for their families overseas for decades. Del was the very first one to leave. She worked in Germany for 27 years. Tes worked in Monaco, Nice, Belgium and Los Angeles. Wena was only 21 when she went to Germany. Lyn worked in Saudi Arabia for a decade. Alona has been working in London for 17 years. Among the 8 women, three stayed. Like Lola Conching, Wilma, Juliet and Beverly are devoted homemakers.

These are the eight women, who left and who stayed, who Luna grew up with. Her path back to Rosario through recounting their life stories is a fraught one. It is the ground zero upon which they decided to runaway from or remain in. Guided by the lived experiences of the eight Rosario women that inform her own as well as countless other accounts of women homemakers and overseas Filipina workers, Luna sharpens eight steel blades. Made in the likeness of the bolo of their hometown used for both in the kitchen and in battlefield, these blades embody the silent battles of women who straddle uninterrupted care-giving and unattended need for self-care. Luna arranges their stories as she reconfigures her own narrative—in a melancholic array of a steely bloom baring the pattern of gendered invisible labor and domestic violence inflicted within and outside the home.

The marks of struggle are written on the women’s bodies. Fueled by a desire to keep their homes, overtime their bodies have worn down as they mechanically participated in national and transnational transactions that have buoyed both their families and the ailing Philippine economy for the past decades. Cysts, ovarian cancers and cataracts now burden their womb, breasts and vision. Luna documents the negotiations that happen in the thin line that is the skin that separates the female body from the outside machinations of society. She transfers this abject in pieces of silk fabric with which the eight women wiped away sweat and tears. These fabric documentations of bodily fluids are corporeal maps bearing witness to the struggles of real women’s bodies.

The enduring allure of Luna’s females lies in their actuality. The persistence of this confessional is summed in the form of pearls laid in a gold brooch. In Philippine national imaginary, the pearl signifies abundance in natural resources that defines a country long subjected to extractive colonial and neocolonial practices. Science explains pearls are secretions to cover irritants, not unlike Luna’s trademark artistic vision of distilling the excruciating to crystalline forms that make up her body of works. It is with this tenacity of holding on to the materiality of women that she lovingly forms pearls into a name in the cursive style of her mother. Before marriage, the women of Rosario all carry the same name that also means war. Guerra is the unstoried matrilineal history with which they, despite all odds, wage life.