Water is running again in the fountain at Casa Vicens 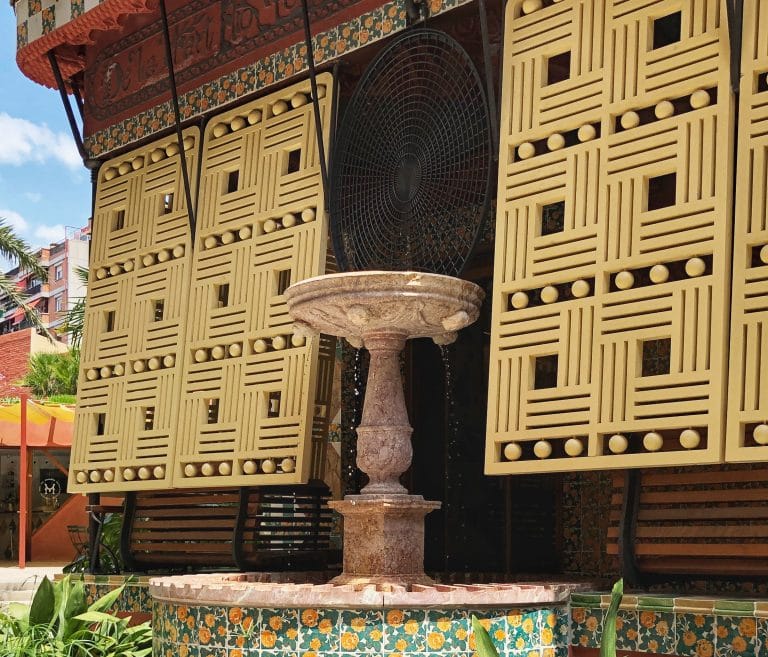 · Water was a key element in the design of the first house by Antoni Gaudí. Originally, the architect conceived a waterfall in front of the main façade, a fountain in the entrance and a fountain on the covered porch.

· The laborious efforts to restore the water system of the covered porch’s fountain regales visitors to this World Heritage site with the essence of the late 19th-century home.

· The opening of this fountain coincides with the anniversary of Gaudí’s birth on 25 June 1852.

When Gaudí was commissioned to build Casa Vicens as a summer house, he knew clearly that water should be part of it. Therefore, aside from the large waterfall that was located in front of the main façade and was demolished in the mid-20th century, the architect designed the covered porch on the first floor with a fountain more typical of a garden than of a porch. In 1925, after the property was acquired by Antoni Jover i Puig and the house was expanded by the architect Joan Baptista Serra de Martínez, Antoni Gaudí’s original covered porch was glazed, changing its original essence.

During the restoration process and work to return Casa Vicens to its origins, which was led from 2015 to 2017 by the architecture studios of Martínez Lapeña – Torres Arquitectos and DAW Office, together with Restauracions Policromia, Casa Vicens’s covered porch largely recovered its original design. This was made possible with replicas of the folding shutters, the placement of the original fountain (known until then by one of the members of the Herrero Jover family, the last owners) and replicas of the iron elliptical mesh over the fountain, produced by Forja Capellas, SL.

Now, the first house designed by Gaudí is being restored in all its splendour by adding the water system to the covered porch. This project has focused on recovering lost pieces, such as two angels located on the bottom of the fountain’s dish and the design of the upper elliptical mesh, which recalls the structure of a spider’s web and had been lost. Furthermore, by incorporating the water system, visitors to this World Heritage site can enjoy a small waterfall throughout the day. The closed circuit allows the water to fall evenly through the iron mesh and the dish distributes it to the mouth of the five angels who pouring water on the square base of the fountain where there is a filter that uses an engine to bring the water back to the top again.

The recovery of Gaudí’s original elements has always been the premise of the Casa Vicens Gaudí project, so that visitors can contemplate the architect’s genius and get a glimpse of how the Vicens family lived in the late 19th century. Therefore, despite the successive downgrading of the property throughout its history, today you can enjoy seeing how Gaudí played with the senses of sight and hearing. He played with the modulation of light through the lattices of the shutters, which produce effects of transparency, the incorporation of water through the fountain, providing freshness, movement and sound, and the evocative poetic phrases of the sgrafitto on the outside of the covered porch. This space full of freshness and calm reached its maximum expression and fantasy when the light penetrated the water falling through the elliptical mesh to produce rainbow in the covered porch.

As Pau Ramírez of Restauracions Policromia said: “the fountain is the culmination of Casa Vicens, the water circuit makes perfect sense for the covered porch and now that it has been finished, we can really enjoy Casa Vicens as the origin of the first work by Gaudí”. As a matter of fact, the launching of the fountain under the covered porch coincides with the anniversary of Gaudí’s birth on 25 June 1852.