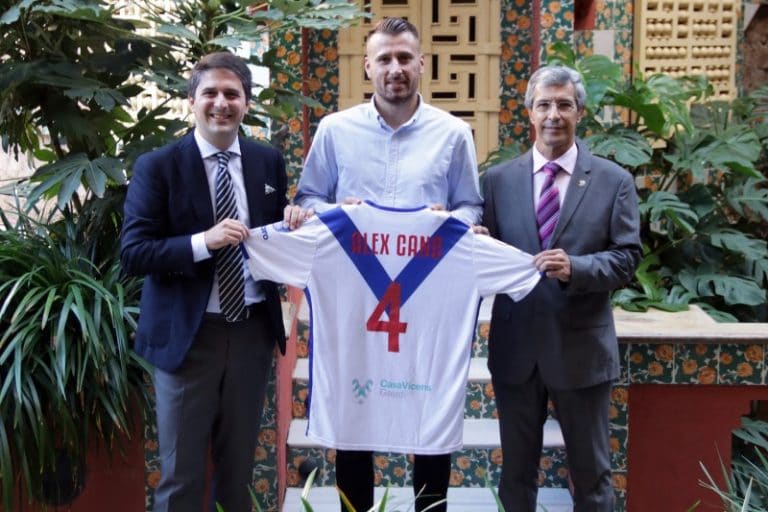 · Gaudí’s first house is continuing its support for its neighbourhood in the Vila de Gràcia, in this case as main sponsor of the local football team

Culture supporting the sports sector isn’t exactly common; we could even say that it is very bold! But Casa Vicens Gaudí has begun the season by supporting the Gràcia district once again, this time through sport, reinforcing its corporate social responsibility by signing a sponsorship agreement with Club Esportiu Europa. In the words of the Casa Vicens Gaudí director, Emili Masferrer, “Club Esportiu Europa and Casa Vicens are both centuries-old institutions that are always there for the gracienses [the people of the Gràcia neighbourhood]. With this agreement, Casa Vicens wants to be one more fan, helping the team in this year’s exciting sporting challenge.”

On behalf of Club Esportiu Europa, its president, Víctor Martínez, affirmed that “we are a club that looks beyond sport and we like to be part of the life of the neighbourhoods that surround us, on a social and cultural level. So for us it is a great honour that Casa Vicens Gaudí, architectural reference of Gràcia, wants to accompany us on our journey of institutional growth and the growth we are experiencing at the sporting and social levels”.

The history of both institutions is intrinsically linked to Gaudí and Gràcia. In the case of Casa Vicens, because of its architect and its location here, before Gràcia became a neighbourhood within the city of Barcelona. In the case of Club Esportiu Europa, its second playing field was located in front of the Sagrada Familia, in what is now the square of the same name. It is even said that Gaudí was the first big fan, watching the training sessions and some matches while working on his grand project. After several changes of location, the club settled definitively on Carrer Sardenya street in 1940. And the present stadium, the Nou Sardenya, was erected in 1995: the tenth field in the history of Gràcia’s football club.

With this agreement, Gaudí’s first house and Club Esportiu Europa are linked for the 2021-2022 season, to reinforce the values of both institutions through creative local actions. Notable among them is the selection of the most creative plays in each match, which can be seen on social media under the hashtag #JugadaCasaVicens starting this very weekend.

In addition to the sponsorship of the first team, Casa Vicens is also supporting innovation and promoting the youngest talent, with a presence at some of the VFO league games, where the Europa eSports team plays each week.