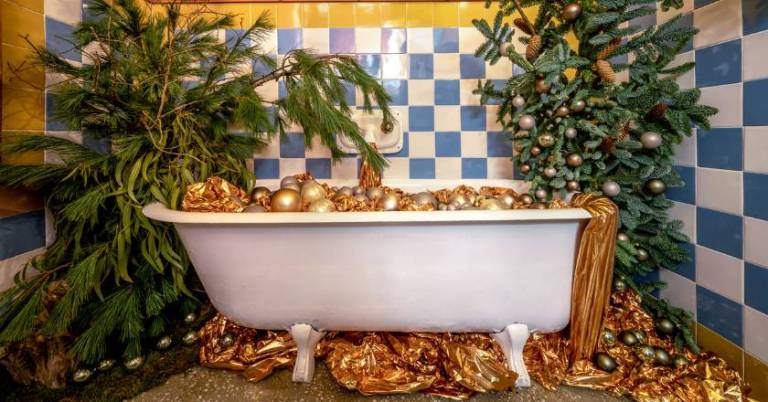 Through January 8, 2023, Casa Vicens is featuring the Christmas decoration habitual for this time of year.

Gaudi’s first house recovers the essence and warmth of Christmas with its holiday decorations made with noble fir, pine and eucalyptus, emerging from a golden surface that evokes a heat wave, one of the consequences of the climate change in which we are immersed. The main focus of this Christmas decoration in Casa Vicens is found in the bathtub of its historical bathroom, an iconic space that boasts spectacular decorations every year and features climate change as its nexus this time. On this occasion, the bathtub represents our planet, a volcano that is overflowing and modifying its ecosystem through human activity. This expanse reaches the balcony, where the materials are repeated and where the lava produced by humanity is clearly differentiated from nature, which is fighting for survival.

In addition to the seasonal decor, this World Heritage Site has welcomed the arrival of winter with its ‘Winter Vicens’ visit. This gastronomic visit includes a self-guided tour with access to the audio guide, plus a seasonal aperitif; in this case, a delicious locally-produced cinnamon roll.